Roermond, the Netherlands 20 April 2018. Sif Holding N.V. announces today that it has been awarded the production of 77 monopiles (68 Kton) for the Borssele III & IV offshore wind farm. Borssele III & IV is developed by a consortium (Blauwwind II) comprising Shell, Eneco, Van Oord, and Diamond Generating Europe, a wholly owned subsidiary of Mitsubishi Corporation. The contract has been awarded by Van Oord as the EPCI contractor for the project and is subject to financial close.

The Borssele III & IV wind farm is located approximately 22 kilometers out to sea from the coast of Zeeland in The Netherlands. The project will cover an area of 122 square kilometers with water depths of up to 38 meters and will comprise of Vestas V164-9.5 MW wind turbines. The turbines will be built on monopile foundations without transition pieces. The total installed capacity of the Borssele III & IV wind farm will be 731.5 MW. 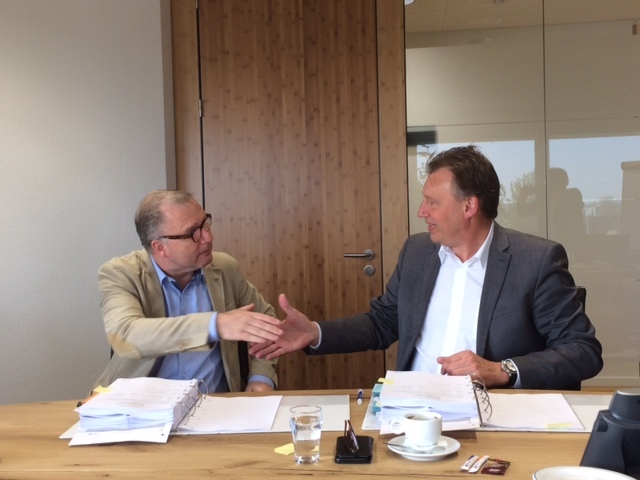 Contract signature by Arnoud Kuis (on the left) on behalf of Van Oord Offshore Wind Projects b.v. and Jan Bruggenthijs on behalf of Sif Netherlands b.v.

The production of monopiles is scheduled from early July until December 2018. The project was already presented in the orderbook of Sif as "exclusive negotiations" and will now be presented as a firm contract. This brings the total orderbook for 2018 at 183 Kton

Looking for a one stop shop marshalling yard at Maasvlakte 2? Have a look at...

Van Oord’s jack-up Aeolus has sailed away from the Port of Rotterdam with the...

Sif welcomes you at WindEurope Offshore 2019

Sif welcomes you at WindEurope Offshore 2019 in Copenhagen, booth C1-C15. Meet us...